Memorable writing is like tape: it sticks with you and seals the gaps between the writer's and reader's minds.

In other words, we write and read to connect with others and establish new memories. If you want to improve the "memorability" of your own writing, start by thinking about images and scenes from books that have stayed with you long after you read them; find and reread some of those memorable words and take notes about what made them stick with you. Then apply what you've noted to a recent page of your own work. Based on your notes, can you see similarities in style that you have emulated, possibly even unconsciously? Do you see how you could enhance your work by incorporating some of your favorite elements from the works you've admired? If you find a passage in your own work that reminds you of a line (or lines) that resonated with you in another writer's work, use that comparison not only to maintain the kind of style that obviously appeals to you, but also to pitch your work to publishers and/or readers as "reminiscent of the style of author ___," which may aid in marketing your story.

For example, during and after reading The Irresistible Henry House, a captivating, witty novel by Lisa Grunwald, I kept thinking about how the style reminded me of John Irving's, and how one editor who read an early draft of my own as-yet-unpublished, humorous middle-grade novel referred to my Fergal McBean: One-Lad Bandt as "like John Irving for kids!" So I decided to compare the opening line of Grunwald's novel with my own opening line about Fergal McBean:

Grunwald's first line: "By the time Henry House was four months old, a copy of his picture was being carried in the pocketbooks of seven different women, each of whom called him her son."

My first line: "When Fergal McBean was born, just outside of Dublin, Ireland, his Ma first gaped, then gasped, and finally grasped the unique beauty of her child."


I immediately smiled to myself at the stylistic similarities in tone, which were entirely accidental, since I just read Henry House's story during the time in which I've been submitting the manuscript for Fergal's tale of fitting in as an outcast-turned-hero. Knowing how much I have enjoyed Grunwald's book, and knowing that my tastes have not changed much since childhood, gives me the idea to consider who, among my favorite MG and YA authors, has essentially the same kind of storytelling style as Grunwald and Irving. I have come up with the following list from my memorable favorites: Roald Dahl, E.B. White, "Lemony Snicket," Sherman Alexie, among others. What they all have in common with the adult books by Irving and Grunwald: a playful style that takes no character's life too seriously; flawed, yet endearing characters whose personalities and desires are revealed via their interactions with others, rather than just by a narrator; lively language, often containing wordplay; humorous juxtaposition of imagery and concepts; the comical downplaying of events (the opposite of hyperbole); and fast-paced, tightly written scenes. With a heightened sense of the stylistic attributes I admire now firmly in mind, I will be able to proceed with the sequel to Fergal's first book with more confidence. An enthusiastic agent to rep the series might help, too....


Not all writing jobs are glamorous. Writing for product labels isn't exactly something to Tweet about...or is it? The writers behind these hilarious Old Spice deodorant labels show all writers how to create memorable words no matter where they appear! I buy men's deodorant--yes, it's true--not just for the smell and effectiveness, but now for these labels! 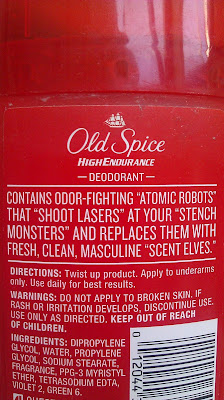 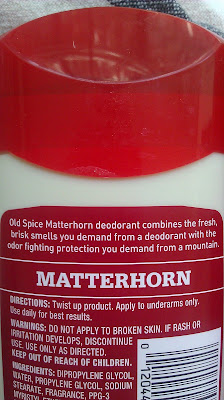 How about those "stench monsters" and the "odor fighting protection you demand from a mountain"? This is ad writing at its most creative, don't you think?
Posted by Susan L. Lipson, Author & Writing Teacher at 9:07 PM No comments: