"To be is to stand for." --Rabbi Abraham Joshua Heschel

Too many people have allowed themselves to be brainwashed by the misguided, clearly unsuccessful strategy for safe coexistence with “others:” the purely reactive approach of standing up to haters, standing with victims, and standing against injustice. We see protesters reacting to acts of hatred with defiant superiority (“standing up to haters”), and neighbors reacting with “misery-loves-company” sympathy (“standing with victims”) or self-righteous outrage after someone’s persecution (“standing against injustice”). But this reactive approach is like fire-fighting with individual fire extinguishers in the wake of troops of flying arsonists, while complaining about the reckless abandonment of so much combustible material along the arsonists’ paths. Perhaps it is high time we that implement a proactive approach to preventing conflagrations, to replace the reactive approach to hatred, by focusing on what we stand for—our ideals, our morals—and modeling those ideals.

I read this morning that a long-time Republican party official publicly stood for his own beliefs by renouncing his membership in the Republican Party and joining the Democrats. Here is the first of a long tweet  thread from Steve Schmidt, the former campaign manager for John McCain:

29 years and nine months ago I registered to vote and became a member of The Republican Party which was founded in 1854 to oppose slavery and stand for the dignity of human life. Today I renounce my membership in the Republican Party. It is fully the party of Trump.

Notice he used the phrase "stand FOR"? This is what we need, more of this. We must all decided who we are, what we stand for. We must raise kids who know what they stand for. We must never forget what we stand for just to stand with others who misrepresent our values and use their power to control us, or just to stand against those who have opposed us in petty politics. Politics are not life. Life is bigger than petty power struggles. Leadership means standing FOR principles. I admire Steve Schmidt.
Posted by Susan L. Lipson, Author & Writing Teacher at 3:53 PM No comments:

And I vote because of young people like these activists, who deserve a world that is safe, accepting of all people, and peaceful. My generation owes them passionate activism, not complacency in the face of the destruction of democratic ideals, of peaceful coexistence, and of our beautiful planet.

Sparked by Injustice, I Wrote This Poem... 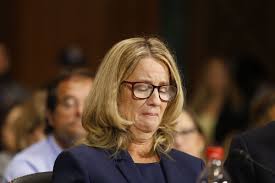 Why is it that men who’ve cried out
years after their abuse by priests
are considered brave heroes,
with suppressed memories—
PTSD, in fact—
when they step forward publicly,
painfully recounting memories to the best of their abilities;
supported by the outraged community
who condemns the defiling of innocence;
not interrogated by critics determined to cast doubts
on their very characters,
to victimize them again,
to mentally rape them
with slander;
while women who dare to cry out
about having been molested, harassed, abused, raped,
and violated in their past youth
by power-seeking men who once were
boys, just being boys
(not “assailants” or “abusers” or “rapists”—just randy boys),
are not considered heroes, but rather:
“politically motivated pawns,”
“confused and misguided neurotics,”
“vengeful liars or self-righteous exaggerators,”
or even “attention-whores”?

Why is double jeopardy illegal,
But not double victimization?
Posted by Susan L. Lipson, Author & Writing Teacher at 5:10 PM No comments: