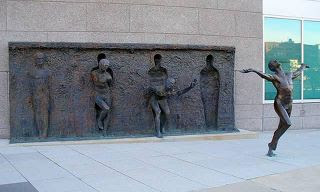 I saw this incredible photo of a sculpture on Facebook (thanks to Glenda!), and my mind went into action, creating tag lines:

We are never stuck if we just step forward.

Emotional paralysis comes from letting others sculpt your identity.

Don't let the medium into which you were born define the artistry you create of your life.

The most memorable moments in life occur when we leap beyond the walls that form our illusory boundaries.


What would YOU write to go with this inspiring picture?
Posted by Susan L. Lipson, Author & Writing Teacher at 12:19 PM 2 comments:

A dear friend of mine, Bob Nelson, is a motivational speaker and author, and in his presentations of his recent book, Ubuntu (http://www.ubuntuthebook.com/), he opens with an ice-breaker game that forces participants to find one thing in common with every person they meet during the session. That simple, yet brilliant, getting-to-know-you game got me thinking....

Shouldn't we all try to find at least one thing in common with EVERY person we meet, EVERY day? Wouldn't life improve on earth if all people practiced looking for commonalities with strangers, rather than avoiding getting know others based on assumptions about NOT having anything in common with them?

Many social enrichment programs today claim to foster togetherness and unity, when, in fact, they foster the opposite by stressing the very concepts that divide people from each other. Ironically using slogans like "teach tolerance," "celebrate differences," and "embrace diversity," such programs focus on how we treat strangers, rather than on how we find friends among former strangers.

A shift in mindset, focusing on commonalities, would be best represented by new slogans, such as: "teach acceptance," "celebrate commonalities," and "embrace unity." Focusing on that which unites us is the only way to eradicate xenophobia and break barriers. The current approach in many social programs does nothing to break down the walls between cultures and countries, neighborhoods and nations; rather, we find ourselves merely painting those walls, to disguise their function by painting them with brightly colored slogans, as though they were art.

"Find one thing you have in common with a stranger." Powerful, memorable, life-changing words.
Posted by Susan L. Lipson, Author & Writing Teacher at 3:04 PM 2 comments:

In writing the following review of one of my new favorite children’s books, I learned a painful lesson about a problem in one of my own book projects—a problem I did not see clearly until now. More on that later....

Here’s the review: Firegirl, by Tony Abbott , is a middle-grade novel that I want every one of my students to read—even the ones older than 13. The first word that comes to my mind to describe this book is HONEST. The second is REALISTIC. The narrator is a 7th grade boy who crosses the invisible boundary created by his fearfully judgmental classmates between themselves and the new girl--a horribly disfigured, lonely burn victim. He first communicates with her not out of courage, but out of obligation; he then befriends her not out of heroic compassion, but out of poignant empathy.

Tom is not an author’s mouthpiece, a puppet-like hero character who acts extraordinarily mature or philosophical to show other characters, as well as readers, how to act toward people who are different and suffering because of their differences. No, Tom is an ordinary, awkward, insecure, and sincere middle-school boy, which is why his reluctant boundary crossing makes him a realistic hero in the end. He admits to being afraid of his burned friend, and to feeling scared about speaking up for her. His fear is how readers connect to him, and his admirable introspective ability evolves naturally from his experience, rather than appearing as a gift with which the author has blessed him, conveniently, to help teach a lesson. This book offers, in addition to a heart-warming story, a writing lesson in characterization—a lesson I have learned.

The main character in my middle-grade novel has been called “too good” and “too wise” by some of the fellow authors who have critiqued my novel-in-progress. Though my protagonist’s hardships helped him develop his introspective quality, he communicates his acquired wisdom far too well, I realize, to be believable. He needs to be more awkward, less confident, more himself, less me. Even if my story has a fantastical bent, my character will garner more love if he is more like my readers. An “Aha!” moment…

THIS IS WHY NOVELISTS SHOULD REVISE BASED NOT ONLY ON CRITIQUES AND THE ADVICE OF OTHER PROFESSIONAL WRITERS, BUT ALSO—AND MOST IMPORTANTLY—ON THE LESSONS LEARNED FROM READING NOVELS IN OUR GENRES UNTIL WE FIND THE PARTICULAR NOVEL THAT PRESENTS THE PARTICULAR LESSON THAT PERFECTLY APPLIES TO OUR PARTICULAR STORY. Whereas the critiques I have received have certainly helped me, reading Firegirl has fanned the sparks I’ve received from others into a blazing recognition. Now off to revise I go…for the last time, I hope.